“I don’t need a University of Wisconsin directory. I need a talented young lady like you to work for me,” the man on the other end of the line phone flirted. 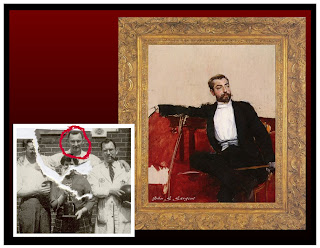 Quickly perusing the bio of my potential savior, I noted I was talking to the owner of a well-known photography studio with an impressive Michigan Avenue address.

“Sir,” I responded, “I’ve had my offer of this directory refused, but I have never had such a creative rejection.”

“Rejection? Young lady, you come see me tomorrow and you’re hired!” he boomed. I had no idea what his job offer entailed, but escaping the hellhole of tele-marketing was too tempting.

“I will be at your office tomorrow right after work—at 5:15,” I said, wondering how I’d make it running in high heels from Wacker Drive to 620 North Michigan.

From sweatshop to Magnificent Mile in one five-minute phone call? Maybe this would be the Chicago version of Lana Turner’s Hollywood discovery at Schwab’s Drug Store. I prayed I was worthy of the opportunity. I was the luckiest girl in the world.

The next afternoon I rushed up Michigan Avenue to Valhalla dreaming of working for this prestigious operation. With a bit of luck, I might be able to continue on a part-time basis when I started college in the Fall.

As I ran up the street, I thought of the time I had served at Rockwell Publishing with a hundred quasi-literate dialers, working on commission, elbow to elbow in a boiler room dive hawking this incredibly detailed piece of drek. Even on a good day, it was impossible to make a living wage, never mind my college tuition. Hour after hour we dialed Wisconsin graduates with a canned pitch designed to appeal to memories of their glory days. The spiel was lame, but it was worth listening to if only to hear our preposterous rebuttals when an alum was reluctant to waste his money.

If, for instance, someone said he couldn’t afford the directory because his house burned down, and he was destitute plus he just found out his wife was the arsonist who wanted him incinerated to collect on his insurance so she could run off with his best friend, I would have a perfect response. Even if he added he was contemplating suicide.

“Sir, now more than ever you need this directory. You cannot pass on this incredible resource. It is filled with names of contractors who will rebuild your torched house, stockbrokers who will make you wealthy, financial planners, divorce lawyers, criminal attorneys who will put your ex-wife in jail, insurance agents who will write a policy that will make your spouse wish she’d not acted so precipitously, and psychiatrists who will help you deal with the pain of betrayal by your best friend. And the support team will all be Badgers eager to assist a Badger brother.”

If, by then, the alum wasn’t begging for a copy of the directory, I’d continue.

“You will also have this handy referral to help you when you begin dating—hundreds of educated women who need not make money in the sleazy way your soon to be ex-wife tried, women who will renew your will to live. Cultured women who share your love for your alma mater bonding with you during Wisconsin football games.

I guarantee you will regret not having purchased the leather-bound edition since your copy will be dog-eared from constant use reaching out to your Badger family who share your Badger pride!”

Fortunately most of the alumni didn’t have such complicated problems, but I did use some variation of the above on most solicitations. Sterling Catch, who offered me the job, hadn't even heard my dazzling sales pitch. What impressed him so that he wanted to hire me sight unseen? Was it my precise diction? My sophisticated delivery? Did he detect the conviction in my voice?

But it didn't matter. Right then, as I hurried along Boul Mich, my focus was on my lucky break.

The Michigan Avenue address reeked of status and respectability. Mr. Catch awaited my arrival and, after a cursory interview of sorts, said I could start the next day. Having asked nothing about my education and/or experience, I figured he was just an excellent judge of raw talent. He was, however, a bit vague about my job responsibilities.

He said, “I am designing a position just for you. While I work out the details, you can familiarize yourself with the studio and staff.”

A job. created. specifically. for me? I was awestruck.

For the first week.

Then I realized Mr. Catch was the anti-Statue of Liberty, welcoming the hungry and tired, as well as the naive and stupid. He preyed on vulnerable souls.

Apparently years before, he had been the photographer of choice for the North Shore’s upper crust, but his glory days were behind him. After succumbing to too many glasses of bubbly and a plethora of sweet, young things, he was left only with arrogance and his extraordinary sales skills. Indeed, if Mother Teresa herself appeared in his studio, he would have considered seducing her. If she failed to recognize her good fortune, he would interpret the rebuff as her loss, and immediately shift into Super Salesman mode to offer her, at a greatly reduced price because of the sheer volume, individual portrait sittings of every forlorn wretch who had ever crossed her path.

Something in his life had gone awry resulting in vanities and character defects so enormous that even an Oprah intervention would have been wasted. His targeting the pathetic resulted in a staff that perfectly reflected his predatory proclivity.

Mandi was the Anna Nicole look-alike receptionist who had been married and divorced so many times she stopped changing her last name because of all the paperwork. She was late a lot and had many court dates. Her complex child-support and alimony arrangements, she said, required frequent tweaking, but I suspected the chronic tardiness and incessant lawyers’ calls had more to do with her nighttime activities.

Mort, the genius retoucher, smoked in the darkroom, and, I reckoned, drank the photo- developing chemicals in there as well. Like a mole, he ventured out of the darkness only occasionally, blurry-eyed and shaky, searching for “… that bastard Sterling!” who routinely demanded he do the impossible.

Theodosia Goodsell was a munchkin widow who suffered ill-health and was particularly vexed by self-diagnosed “neuralgia” which caused her to disappear for days on end. Only gallons of gin soothed her pain. On her good days, that is, the days she showed up in working condition, Mrs. Goodsell’s sales skills put even Mr. Catch's to shame. Her job was to call on the recently bereaved to offer them a once in a lifetime opportunity to order an outrageously overpriced oil painting of their newly deceased loved one. Unfortunately though, her frequent slugs from her thermos of “cough syrup” while telephoning potential patsies led to more than a few bizarre scenarios.

Irene, the resident artist, who executed these paintings was responsible for making the bereaved’s dream a reality. She spoke five languages fluently, but only enough English to keep us confused. Her salad days were spent fleeing the Nazis and now, because she’d lost everything in the war, including her academic credentials, she was reduced to painting over huge enlargements of snapshots. Often the head of the subject in the original photo was pea-size and Mr. Catch would insist Mort blow it up to 16x20, thereby obliterating the facial features. It was Irene’s job to paint a face that would be somewhat recognizable to the widow. Much of the time, not because of Irene's lack of expertise, the finished portrait would make a paint-by-number picture look like an Art Institute masterpiece.

Completing the off the wall cast was Evelyn Bates, a society woman who’d fallen on hard times. She never quite came to grips with the fact that life had relegated her to soliciting portrait sales from survivors of the dead. She took great pains to maintain the pretense of working “just to keep busy…” but her hopelessly outdated wardrobe, and tales of forty-years past soirees signaled her denial.

It was an unusual group, but even more peculiar was the fact that there was no photgrapher on staff. Instead we had a series of photographers who would apply for the "vacancy," work like demons during their unpaid month-long "audition" photgraphing weddings, bar mitzvahs and debutante debuts and pray they'd get hired. They would cover a variety of events so Mr. Catch could get a "valid sample of your work," but, alas, at the end of a month they never quite had what it took. "You are a competent photographer, but you're missing that 'certain something' I can't explain," Mr. Catch would say. "You're just not a good fit for my North Shore clientele." It was a brilliant never-fail scam.

The Cabinet of Dr. Caligari had nothing on us--a talented addict, a wacko single mother, an ancient alcoholic widow, a delusional has-been with a dying husband, a Displaced Person who had lost everything in the war, an "auditioning" photographer and a broke college kid.

Trapped by circumstance, desperate for work, we were a captive crew ripe for exploitation which Mr. Catch scented like a foxhound.

Outside of the events captured by the "probationary" photographers, the dearly departed were the headliners. In the days when Kodak Brownie box cameras were considered high tech, when certain socio-economic groups cherished a snapshot of a loved one the way blue-bloods revered a John Singer Sargent portrait, Mr. Catch carved a predatory niche, and he never looked back.