Don't We All and Haven't We Always 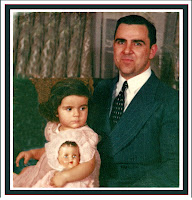 When I write about my father, the picture painted can be harsh. It was a thorny relationship, I joked, because we were twins born thirty-three years apart—mirror images who shared generous hearts and quick minds, but also iron wills and fierce tempers—a volatile combination. Perhaps a lithograph, where oil and water don’t mix, better describes the bond, but I prefer heavy oils which never fade.

All paintings require contrast and balance, emphasis and proportion and perspective. No small task to see a picture when one is in it, distance oneself when love blurs the vision, or appreciate a child’s worm’s-eye view for what it is—justified, but limited.

The brush of humor blends rough lines, the stroke of wit softens glaring reality but, without perspective, the finished product is one-dimensional, without texture or shape. Creating the illusion of three dimensions by applying layers of heavy oil, scraped from the palette of emotion with tints of laughter and shades of hurt, is no substitute. Though impaired eyesight was corrected early on—I wore eyeglasses from third grade—it would take much longer for me to recognize my heart’s limited perception, clouded by circumstance, distorted by pain.

Age, however, changed my vision, allowed me to fly above the landscape, to get a bird’s-eye view of a sub-culture which rigidly defined the male role as man of the house, breadwinner, ruler of the roost and king of the castle. A culture that not only accepted certain behaviors, but expected and required them as well. A culture that revered rules, and valued authority over expression—where shame and fear kept people in line—where life was serious, tough, leaving no room for mistakes, risks or wrong moves—where there were no second chances.

New lenses improved my mind-sight. My expanded point of view neither justified nor defended; it simply clarified and validated. And that clarification and validation shifted me toward the light, toward understanding and compassion, allowing me to inch forward.

“At that time, in that culture” does not excuse the absurd or rationalize the unacceptable, but it does allow me to see the humanity of the man behind the behavior, a man who did his best with what he knew. And except for the psychopaths of the world, don’t we all and haven’t we always?

The mother who had her kid's feet x-rayed in the shoe store to insure a good fit, the grandmother who cradled the baby in her arms in the passenger seat, the parents who told their sons and daughters they weren’t smart enough, good enough, fill-in-the-blank enough to make them stronger, more resilient to life’s vagaries, were acting out of concern and love.

The doctor who prescribed a stiff cocktail for the overwhelmed patient, the experts who advised parents who’d lost children not to talk about it, not to bring it up, to just move on with their lives, the priests who counseled women to stay in abusive marriages believed they were operating in everyone’s best interests.

Wearing my “at that time, in that culture” spectacles, I see that long before one is a parent, one is a human being with often too little time, too many demands, too much responsibility and too few resources. I realize some of life’s best lessons are about what not to do. I celebrate, through story-telling, the hilarious parts of my experience and I document the painful to weaken its hold.

Most importantly, I no longer evaluate yesterday’s mistakes under today’s microscope.

I accept that once I know better, I am obligated to do better. I am committed to not repeating errors, to speaking out when my gut tells me something is amiss. And if I miss such an opportunity, I pray my children know I did the best I could and extract every last bit of humor from my less than perfect parenting.

I hope they look back to the past to understand and appreciate, but not get stuck staring. I pray they have the moxie to paint their own pictures and the courage to include a self-portrait.

And finally I trust they will take responsibility for their lives and understand that, after all is said and done, they are the curators of their own collections.
MLSE 2/09
2 comments: