Where did I come from—how did I get here? No one agreed.

My brother said "the stork brought me". 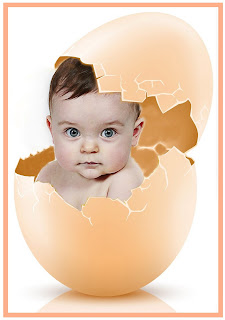 The girl upstairs said "babies were left on doorsteps".

My cousin told me doctors carried dead babies in their black bags and a mother gives life by breathing into the baby’s nose.

Raphaella (Raphy) Paradiso, my fifth-grade best friend forever, told me she saw some weird looking babies in glass jars at the Museum of Science and Industry.

“Raphy,” I said, “That is so stupid. Babies do not come in glass jars.”

“Well, I went to the Museum’s Chick Hatchery, and I saw with my own eyes baby chickens pop out of eggs. If a chick can crack out of an egg, why can’t a baby come packed in a jar?” she reasoned.

Maybe she’s right I thought. Everyone says I look like my dad. Maybe my mother picked my jar because I had eyes that reminded her of my father.

“That makes sense, Raphy, but you’re forgetting one thing. Mothers get babies from hospitals not museums,” I said with more than a bit of scorn.

“Not always,” Raphaella countered, “you heard Sister Praxeda tell the Christmas story about the stable, and you saw the eigth graders' Nativity play. Jesus was packed in straw. They didn’t show how he got in the manger in the first place.”

Just when I thought I was making headway with the puzzle, Raphy brought up another piece that added to the confusion.

Raphaella, who’d obviously given this a lot of thought, said she’d found out in second grade that Santa Claus was a fake, that he didn’t fly over houses or come down chimneys, that it was all a big fat lie.

“OK, so Santa’s not real, but you’re not saying Jesus was a fake too, are you?” I asked aghast.

“Of course not,” she reassured me, “but I do wonder what exactly they’re talking about when I hear the Christmas story. For instance, what’s "a Virgin"? Was Joseph the father or wasn’t he?

And what the heck are swaddling clothes? And you know what else? I think the Three Kings, The Magi and the Wise Guys are all the same people.”

“They are the same, and they’re Wise Men not Wise Guys, though I don’t know how wise they were bringing frankincense and myrrh to a baby instead of a toy. But why,” I asked in exasperation, “are we talking about dumb presents and Santa? We’re supposed to be figuring out how kids are born, and we’re not even supposed to be talking about this.”

“I know,” Raphaella lamented. “My mother said I should always come to her if I have any questions, but when I asked where babies came from, she blew her cork. She said, ‘I’ll tell you when you need to know. I’ll tell you when the time is right.’ In my house, that means never.”

I was too embarrassed to tell Raphy how asking about babies almost got me killed.

Once during a family drive, my mother mentioned to my dad that a cousin was “expecting.”

Piping up from the backseat, I asked, “When is she due?” I was about eight years old and had no idea what that meant, but I’d heard a neighbor ask that of a pregnant lady, and I thought it sounded grown-up.

“When is she due?” my father shouted as he practically ran our car off the road and screeched to a halt. “Mary,” he thundered, “what are you teaching this kid? Where did she learn that? Who is she talking to,” he continued bellowing. “You’re not watching her friends,” he accused. “You need to talk to her teachers! This kid is out of control.”

The virulent tongue-lashing almost had my mother in tears and, cowering in the backseat, I vowed never, ever to get my mother in such trouble again, and I never did. Thanks to fear and shame, I remained ignorant for a very long time.

When I became a mother, I vowed no question would go unanswered and no subject would be off limits.

One day, when my daughter was about seven, I found her and her friend, Cara, playing with their beloved Barbies. There were about a dozen of the stupid strumpets swimming in the Barbie pool with a few boyfriend Kens floating around too. One doll caught my eye.

“Oh, that’s Barbie’s gay friend,” she chirped. “They’re going for a swim before they go shopping.”
I swear I heard a car crash.

Mary Lou,
This story had me laughing out loud as most of your of your oral and written stories do. I came from a baby store and my mother picked me because I was the only one smiling. How's that for the power of suggestion?